Blackberry Cheesecake with Ginger Cinnamon Crust (Low Carb & Gluten Free) – This berry cheesecake is layered. I layered the vanilla cheesecake base, and blackberry puree infused cheesecake base. I just poured, leveled out, poured out the next layer, leveled out and kept going until I finished the fourth layer.

This blackberry cheesecake with a ginger cinnamon crust is a perfect dessert for a crowd. It serves 14-16 modestly, or 8-12 not so modestly.


This makes for a very pretty presentation. The pictures don’t show it, but as you cut into the cheesecake pieces the layers are very pronounced.
INGREDIENTS
Ginger Cinnamon Crust 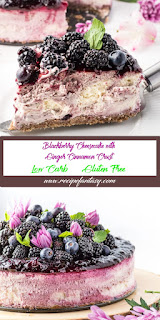