Home > Info > Why Men Are Afraid Soy Will Turn Them Women

Burger King’s inaugural commercial for the Impossible Whopper, the plant-based burger it launched internationally in November, is dominated by burly men biting down and experiencing aggressive disbelief. In a hidden-camera scenario, loyal consumers of the Whopper are deceived, receiving an otherwise-identical burger whose patty has been forged from soy by the company Impossible Foods. True to the brand name, the men appear incredulous. Two are only able to process their emotions by swearing. 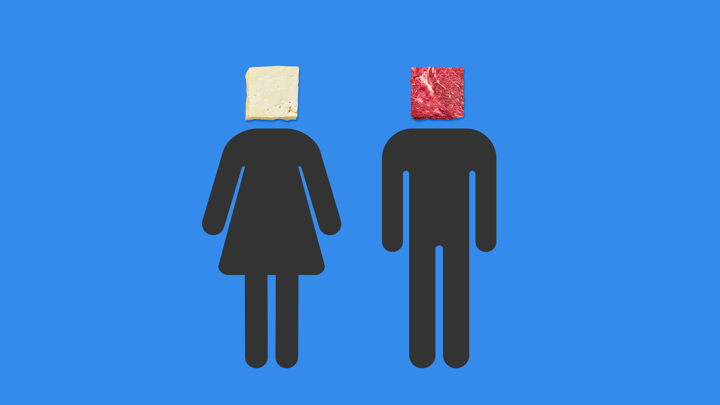 “This is a [bleep] cow,” one man splutters. (It’s censored, but he clearly says fucking.)

Not to be outdone, the baritone narrator replies, “No [bleep] cow.”

The tension in the commercial derives from the divide between fast-food consumer bases, which skew male, and vegan consumer bases, which skew decidedly less so. Yet the manly Burger King customers ultimately come away open-minded—if not altogether converted—and say they’re more inclined to order an Impossible option tomorrow. Though it’s never addressed head on in the ad, there’s a clear subtext of sexual stigma: Are they really man enough to eat a soy burger?

Among at least some vegan-curious men, plant-based proteins are inextricably tied to gender. Thought-leading bros like the podcast guru Joe Rogan and the pop/clinical psychologist Jordan Peterson have turned to all-meat diets, fueling an eating trend that appeals to a sense of purity or natural order, despite knowing the burden of their choices on the planet. Taken to an extreme, some men believe that the primary ingredient in the Impossible Whopper and countless other vegan products will literally turn them into women.

This is the culture war into which James Stangle tossed a grenade. Stangle has been a cattle veterinarian for 30 years. He lives in Milesville, South Dakota, and writes a column for the local trade publication, Tri-State Livestock News. In December he published a takedown of the Impossible Whopper, concluding, “Here’s to hoping that the Impossible Whopper is a possible flopper.” His case hinged on the fact that the main ingredient in Impossible Burgers is soy protein. Among other allegations, Stangle claimed that “an impossible whopper has 18 million times as much estrogen as a regular whopper.” He also said that eating four Impossible Burgers per day “has enough estrogen to grow boobs on a male.” (Impossible Foods did not immediately return a request for comment.)

The veterinarian’s musings, once they were fed into the internet’s decontextualization machine and transformed into headlines such as “IMPOSSIBLE BURGER MEAT HAS 18 MILLION TIMES MORE ESTROGEN THAN BEEF,” caught the attention of national media. Fox News and The Washington Post both debunked Stangle’s claim. Scientists and doctors at the fact-checking site Health Feedback reviewed the evidence and issued a verdict: “Inaccurate: Soy does not contain estrogen, which is a mammalian hormone.”

To say that soy doesn’t contain estrogen is technically accurate, but it’s an incomplete and loaded assessment. Some plants do contain compounds that are similar to estrogen, called phytoestrogens. Soy contains relatively a lot of them. Phytoestrogens can mimic the effects of estrogen in human cells, but the significance of that effect on the whole human body is unclear. Some lab tests make the phytoestrogen effect sound powerful. For example, in November, a study in the Journal of Food Science compared assays on milk, rice, burgers, and tofu. Researchers reported that a tofu burger had 750 times more “estrogenic activity” than the other foods, and three times more than a dose of Premarin estrogen-replacement therapy. Though what, if anything, such “estrogenic activity” would mean in human bodies is unclear.

The authors consider their findings to be “crude theoretical estimates” of how soy could affect humans, and note that this sort of study done in isolated cells doesn’t mean the effects would be significant in living humans. Other studies suggest not. In one randomized trial, men took high doses of soy phytoestrogen every day for three months and saw no change in their amount of breast tissue. They did, however, show improvements in some markers of metabolic health, including blood sugar and markers of inflammation.

At a purely practical level, experts presented with the breast question have cited the basic fact that men in many Asian countries have long consumed soy-rich diets. They do not have gynecomastia (development of breast tissue) at especially high rates; if anything, diabetes, heart disease, and many cancers tend to be low compared to those in the U.S. Yet Asian men have long been depicted as effeminate in Western culture, along with the soy they consume. Carol Adams, the author of The Sexual Politics of Meat, notes that “colonialism feminized Asian populations—the beef eaters conquered the rice eaters—and this feminization of the colonized is persistent.”

Obesity, meanwhile, is seen at the second-highest rates in the world in the burger-addled United States. Men who are truly concerned about the appearance of “man boobs” might note that the colloquial definition usually involves fatty tissue, not breast tissue. Diet is not the only factor that contributes to obesity, and in the United States, it can be difficult for people to change how they eat: You simply can’t go to healthy restaurants or find good groceries in a lot of the country. Even so, men who have the time and means to eat well and want to avoid fatty tissue on their chests might try to avoid fast food generally rather than pinning their anxieties on a vegetable.

Unlike soy consumption, obesity has long been known to be associated with decreases in testosterone. Low testosterone is associated with erectile dysfunction, which is also determined more by overall metabolic health than by eating or avoiding any single food. Soy was implicated in one strange case report from 2011, where a man lost his sex drive after becoming vegan, then regained it after a year of eating meat again. But the time frame makes it unlikely that the meat was the curative agent, and even the doctors reporting the case say it’s the only one to link soy consumption and testosterone levels, even though it’s not the only one to investigate such a correlation. Broader reviews of evidence have found no difference in testosterone levels between vegans and carnivores.

On the whole, concerns about soy and sexualization draw from scattered cases and isolated data points. Claims like Stangle’s play into concerns more fundamental than a literal fear of estrogen. The myth of physical feminization has its basis in existential concerns about power and status. Adams has studied this idea at length. She and other scholars have argued that the idea of veganism is rolled up with qualities like compassion, conscientiousness, and empathy—for animals or the environment. By modern American cultural standards, these are feminine traits. Violence, physical domination, and self-interest are masculine. Add in the global history of colonization, Adams says, and meat has become equated with white, heterosexual men. “Now it’s kind of like plant-based meats are here to take away their identity,” she says. “So eating meat is a sort of reactionary attempt to reclaim something that’s already been lost.”

I emailed Stangle for his take on the fallout from his post. He flatly said he had been wrong, specifically about the 18 million number.

“I wrote my article for a small local paper never expecting it to go viral. When it did, I fact-checked myself and issued a retraction,” he replied. “As is usually the case, the retraction didn’t get much traction.”

This wasn’t what I was expecting to hear. I perused Stangle’s retraction note in the beef newspaper, which included an apology with the sort of candor rarely seen on the internet: “Most of the response was to the comment that if a guy ate four impossible whoppers per day, he would eventually grow breasts,” Stangle wrote. “To be true, there is no evidence that this can happen.”

Stangle said his new position on Impossible Burgers is that moderation should be recommended, in all foods. He also emphasized that he is not part of any “right wing think tank,” as some people accused him of when his post went viral. Rather, he is intimately familiar with the costs and benefits of farming cows. He has dedicated his life’s work to their care while they’re alive. He also thinks they are good to eat.

It’s rare to hear anyone admit that they made a mistake when arguing for a diet they believe in. Once a way of eating becomes central to our identities, we default to believing whatever evidence supports the fact that we’ve chosen wisely and are living virtuously. The world is ordered, and our understanding of it is coherent. Plus, admitting you’re wrong can make you grow breasts. I read that online.